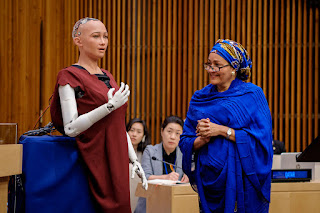 With Etisalat's help, Hanson Robotics, based in Hong Kong, is showcasing Sophia at the ongoing IT fair Gitex Technology Week, which has gathered 4,100 exhibitors from over 70 countries including China.

Jeanne Lim, Hanson Robotics' chief marketing officer, hailed Etisalat for its interest in artificial intelligence, while adding that Hanson's partnership with Etisalat is "still in a test phase."

At Etisalat's stand at Gitex, visitors can talk to Sophia and ask her questions in order to test her humanoid capabilities.

Lim told Xinhua that the use of Sophia in the education and business fields converges with Etisalat's support for digital educational strategy implemented in the UAE.

"Sophia can be used as an educational toy," Lim said, stressing that Sophia fits into the UAE's digital educational strategy.

It is a lifelike social robot that can establish relationship with people through 60 programmed facial expressions.

"Sophia is a media personality, she was part of a movie and on a TV show," Lim said.

However, Lim said that more work needs to be done for the commercialization of Sophia, and a proper plan is needed to be designed by Etisalat to put the robot into commercial use at the shopping malls, schools and hospitals in the UAE.

So far, Hanson has only launched the consumer robot Professor Einstein for private homes in the United States, as it has not yet started large-scale manufacturing of the robots.