Who is Otis Oliver Tabugbo Anyaeji, The New President of Nigerian Society of Engineers, NSE? 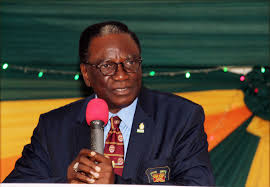 On January 16th 2016, the Federal Capital territory, Abuja played host to some of the biggest minds, leaders and achievers in Nigerian Engineering. Young and old, they thronged to the International Conference Centre Abuja for a single purpose: The honour of Nigerian Society of Engineers and its 30th President, Engr Otis Ayaeji FNSE.

Founded  on 16th February, 1958, the Society has recorded successful smooth transition from Engr Chief G. O. Aiwerioba ever since spanning 30 generation of Presidents as listed below.


So who is ENGR. OTIS OLIVER TABUGBO ANYAEJI the 30th NSE President?


ENGR. OTIS OLIVER TABUGBO ANYAEJI, a mechanical, automotive, plastic, cost and valuation Engineer, and strategic planner, was born on 4th March, 1951 in Onitsha, Anambra State. He entered the Holy Ghost Juniorate Ihiala, in 1962 with the aim of becoming a priest but had to withdraw at the end of that year. Between 1964 and 1971 (excluding the civil war years), he attended Christ the King College (CKC), Onitsha – primus inter pares, where the authorities record him as possessing an outstanding ability in mathematics. In June 1971, he obtained the West African School Certificate.

Proceeding for the Faculty of Engineering of the University of Nigeria, Nsukka in September 1971, he studied for and bagged the degree of Bachelor of Science in Mechanical Engineering in June 1976.

Engr. Anyaeji was consulting Engineer on the rehabilitation of NEPA Power Stations at Afam and Jebba – the first time ever Nigerians performed such role.

In the power sector he facilitated government intervention, from an initially conceived Seven Medium Sized Power Stations in the Niger Delta Area, to an integrated nationwide programme comprising generation (10No. Power Stations), transmission (110No. Transmission Lines/Substations), distribution (1230No. Distribution Lines & Substations), and gas components (15No. Pipelines & Metering Stations). This became NIPP, one of the biggest ongoing power projects in the world.

Since 2010, Engr. Anyaeji has directed the performance of his firm as Joint Project Management Consultant, on the 10MW Wind Farm Power Plant Project in Katsina, the preparation of the Feasibility Studies on the 50MW Wind Power Project in Igbokoda, Ondo State, the preparation of the Feasibility Studies on Small Hydro Power Plant on the Zobe Dam in Katsina State, Adada Dam in Enugu State, and Ivo Dam in Ebonyi State.He is the Project Director on the EPC of Nigeria’s first Solar/Wind Hybrid Demonstration Power Plant, Kainji, Niger State which was commissioned by the Hon. Minister of Power in April 2015.

In the oil and gas sector, he has been a technical training Consultant to the Petroleum Training Institute, NNPC and its subsidiaries, CHEVRON, ASHLAND, SHELL, etc. Between 1993-1994, he performed as Lecturer on Feasibility Studies, NNPC Chief Officers’ Course.

Since 2005, he has been Project Director on Telecommunications and Teleprotection Networking linking 90 power stations and transmission substations on the Nigerian power grid. At the Radio Assembly 2015 in Geneva, Engr. Anyaeji’s nomination as Vice-Chairman for the International Telecommunications Union’s Study Group No. 7 on Science Issues in preparation for WRC 2019 was approved.

From March 1990 – July 1993, Engr. Anyaeji served as Deputy Chairman of the Standing Technical Committee (STC) on the Nigerian Automotive Industry, with the Hon. Minister of Industry as Chairman. During this period, he midwifed the establishment of the Center for Automotive Design and Development (CADD), Zaira, acting in the capacity of Chairman, Low Cost Vehicle Project Committee.

He authored the National Automotive Policy approved by the Federal Executive Council in 1993.Subsequently, Mr. President appointed him on merit as founding Chairman of the National Automotive Council (NAC) which the policy created to replace STC. During his brief tenure as Chairman NAC (up until August 1994 when all Federal Boards were dissolved), he led the Council to obtain government approval of tariff differentials between imported CKD’s and FBU’s to be between 30% - 100%; established the magazine – AUTO NIGERIA, gazetted a Federal Government Circular directing all Federal, State and Local Governments and Agencies to buy only Made-in-Nigeria vehicles; oversaw the establishment of the Council Secretariat, and initiated the commencement of the implementation of the National Automotive Policy.

As the founding Alternate Chairman of CADD and Chairman of the Technical Committee of the Board of the Center for Automotive Design and Development, Engr. Anyaeji supervised the R&D activities of the Center up to the completion of the design work on the CADD Mark I Low Cost Vehicle Model.

He produced in 1997 as an invited Resource Person, a strategic plan for the Review of the 1986 National Policy on Science and Technology. IN 2015, the Economic Community of West African States (ECOWAS) invited him as a Resource Person on the Workshop on the Development of the Automotive Industry in West Africa (Lagos, Dec. 2015) with the mandates to prepare and present the documentary review of all national import policies as well as regulations, and preparation of plan for establishment of an integrated automotive industry in West Africa, amongst others.

Engr. Anyaeji served as Commissioner, in the Presidential Commission for the Review of Higher Education in Nigeria (Longe Commission) between December 1990 and November 1991. During his tenure in this Commission he made significant contributions in the areas of Polytechnics, Universities of Technology, and vocational education. He was in the Commission’s 3-man delegation that visited UK, West Germany, and USA for a comparative study of their higher education systems, encompassing visitations to 30 universities and other higher institutions.

In philanthropy, Engr. Anyaeji in 2014, donated a fully-equipped metrology laboratory to the Federal University Oye-Ekiti (FUOYE), Ekiti State. The official commissioning was held in May 2015. Subsequently that year, Engr. Anyaeji and his amiable and supportive wife endowed a Research Chair in the University of Port Harcourt, which in their honour has been christened ‘Nkechi & Otis Anyaeji “Distinguished Professorial Chair” in Engineering Valuation, Engineering Economy and Cost Engineering’. They are in the process of establishing the Centre for Engineering Valuation, Cost Engineering and Engineering Economy in the University of Port Harcourt.

In 2014, the University of Port Harcourt appointed Engr. Anyaeji as Expert-in-Residence in Engineering in recognition of his contributions and accomplishments in the Engineering Profession in Nigeria and beyond. In 2015, The Department of Electrical Engineering of his Alma Mater, the University of Nigeria Nsukka, bestowed on him the award of the Distinguished Engineer in National Development. The Nigerian Society of Engineers Maitama Branch instituted in 2015, the annual legacy Distinguished Lecture series in honour of Engr. Otis Anyaeji.

Engr. Anyaeji has numerous publications to his credit in various areas of engineering policy and socio-economic development. During his tenure as Secretary General NSE he affected public policy positively in the following areas: Engineering Practice; Building Code; Intellectual Property Rights; Public Utility Regulation; Commercial Law Practice; Assets Valuation; Statutory Inspection of Pressure Vessels and Lifting Devices etc. On Assets Valuation, his initiative led to the amendment of the Decree No.1 of 1990 with Decree No.46 of 1991 to include engineer in the definition of ‘Valuer’, while on Company law reform his struggles resulted in the concession of a seat to the engineering profession in the Corporate Affairs Commission, vide the same Decree No.46.

BUILDING THE ENGINEER’S SELF CONFIDENCE FOR PERFORMANCE By Engr. Chris Ekpekurede

September 19, 2016
Introduction Engineers are naturally gifted and intelligent people. As I had occasion to say to the Association of Professional Women Engineers sometime ago, although God created the world, engineers are helping to recreate and change it every day. They do so by unleashing their God-given talents. Engineering provides a good outlet for the expression of the human imagination. That is why you find well rounded engineers in politics, industry and commerce succeeding very well. Although intelligence is a requirement for becoming an engineer, it does not necessarily equate to the possession of self confidence, a quality that is required to achieve great success. There are many engineers who have not made a success of their callings because they are lacking in this important personality trait. You can therefore say that, even among engineers, you can find men and women who are intelligent failures. What is Confidence? The Oxford Advanced Learner’s Dictionary defines confi
Post a Comment
Read more