Five dead, several others trapped as building collapses in Lekki 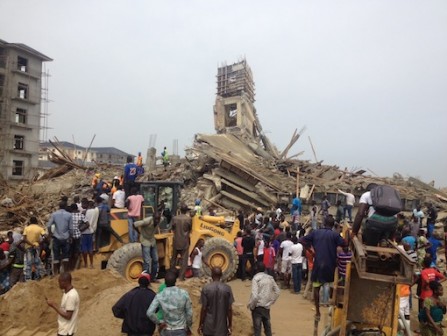 No fewer than five people have been confirmed dead and others feared trapped after a five storey-building collapsed at Lekki Phase one on early Tuesday morning.

Local residents who trooped to the scene say the disaster had long been expected as the developer, Lekki Gardens, allegedly build houses “in a speedy manner”. 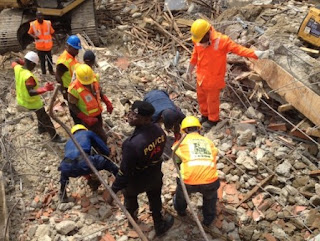 The building is part of house being constructed by Lekki Gardens located at the end of Kushenla road, Chisco bus stop.

Eye witnesses said that government ambulances have conveyed both the dead and rescued victims out of the scene at least twice.

One of the workers on site, a bricklayer, Victor Suru, a Benin citizen, told our correspondent that his friend, his wife died in the incident. 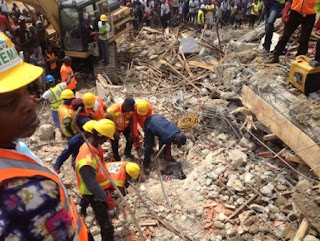 “They owe us for months, the engineer doesn't give us complete money. Now they are killing us. I came from cotonou to make a living, but look at what has happened.”

“We have no choice but to work. Normally they suppose to leave these lands for years before building on it. But they keep telling us to keep working even though the owe us.”

None of the officials around was willing to give any update. 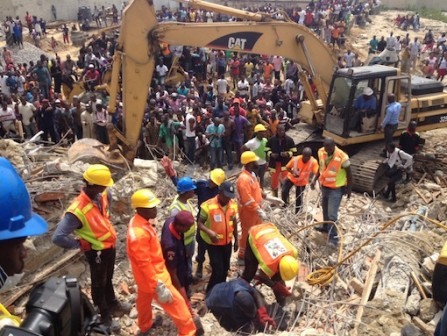 September 16, 2015
In other to ensure professional development of all students across all institutions of higher learning offering Mechanical Engineering, NIMechE inaugurates student wings called “National Students Forum” across institutions to easily get across to student, ensure their professional development and mentorship during their school days. NIMechE has inaugurated several student chapters. And the recent one to be so inaugurated is University of Uyo in Uyo, Akwa Ibom State. Miss Glory Essien, the Pacesetter The event was declared opened by Blessing Ekpo, after which the guests were introduced and usher on the high table to signal the official commencement of the event at the fully packed PTDF Auditorium of the University. Chairing the Event was the NIMechE Akwa Ibom Chapter Chairman, Engr. Ekerete Usak MNSE MNIMechE MASSE with Engr. Dr. Obotowo W. Obot and Engr. Youngson. N. Ukaru delivering the inaugural lecture. Also on around are Head of Department, Mechanical Engineering Universit
2 comments
Read more

THE ENGINNER WHO DESIGNED BANANA ISLAND

July 26, 2015
Banana Island Ikoyi Lagos was design by Engr. (Chief) Adeleke Adebayo the father of popular and famous musician "Davido" Omo baba olowo. Banana Island, is an area of Ikoyi, Lagos, Nigeria, 8.6 kilometres east of Tafawa Balewa Square. Part of the Lagos Local Government Area of Eti-Osa in Central Lagos, it is known for its wealthy, multi-cultural community and has some of the most expensive real estate in Nigeria. Banana Island has one of the highest density of millionaires within its boundaries. According to the Elites Magazine, this beautiful island has become the most preferred abode of the rich. Many years ago, Banana Island distinguished itself as a no go area for the middle class, leaving the rest of Lagos such as Ikeja GRA, Victoria Island and Lekki for the average millionaires in Lagos. A first time visitor to this island is greeted by the sight of well laid lawns with beautiful flowers and well paved roads. The quietude and untainted environment is a major attr
2 comments
Read more