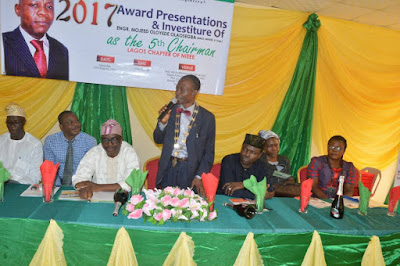 In a bid towards fostering students’ interest in engineering careers and prepare them for the real world of word, the Nigerian Institution of Electrical and Electronics Engineers (NIEEE), Lagos State Chapter, has unveiled its agenda for young Electrical Electronics Engineers development just as it plans to establish its student’s chapters in polytechnics and universities in Lagos state and its environs.

This was made known by its fifth Chairman, Engr Mojeed Olaosegba at the 2017 Award and investiture ceremony in Lagos. He said the idea would help to inculcate in the students the necessary ethics, boost quality and lift them to a greater height in life.

He said the Chapter also plan to “institute an award in honour of the best graduating student in the Department of Electrical & Electronic Engineering of the University of Lagos before the next convocation of the University.” and will replicate this as much as possible in other institutions in Lagos in near future. This, according to him “becomes necessary in order to celebrate academic success and quest for professionalism in Science, Technology, Engineering and Mathematics (STEM)”

The Chairman also noted that the Institution would “partner with government and relevant agencies within the public and private sectors as well as other sister engineering bodies in order to bring about the much needed improvement in the way engineering is being managed especially in the power sector.”

A lecture  titled, “Energy Efficiency Methods: An Opportunity to create value in our organizations”, was presented at the event by Dr. Robinson Ehiorobo, Managing Director Havilahtrend International Limited (HTIL).

In the lecture, Dr Robinson lamented that the nation is losing over N860 billion annually due to lack of energy efficient application philosophy.

To surmount the challenge, he called for a review of the method used in providing street -light in urban area, which seems to be wasteful, a review of the use of absorbent and Ehudent design in providing streetlight in the village. He also canvassed for the need to address the visible wastages due to poor quality of utility supply, eliminate the challenge of low power factor and the need for professionals to create value in their respective communities.

Some of teh dignitaries at the event are the National Chairman, NIEEE, Engr Emmanuel Akinwole (who chaired the event), Rt. Hon. (Barr) Michael Adesina Adeyemo, The Honorable Speaker, Oyo State House of Assembly, Engr Kola Balogun among others.

The Nigerian Institution of Electrical Electronics Engineers, NIEEE is a Division of Nigerian Society of Engineers. The Lagos state Chapter is one of the foremost chapters in the country, with innovative programmes. You can reach them at : Email: info@nieeelagos.org.ng @NIEEELagoschapter ; twitter: @nieeelagos : Phone: 0803 562 6181